Dislike(嫌いなこと)：
To go outside home

Ambition(野望)：
Live in a house made of sweets, with beautiful women

EU art dealers are talking.
The rumor is that the works of some new artists are fake.
It seems that even auctioneers cannot tell.

I hear the rumor of one painter.
She lives in a big house and rarely leaves the house.
Rumors call rumors.

The merchants selling the art, which were so good that they were indistinguishable from the real thing,
someone started Calling she with respect — “FAERIE FORGER”

It seems that it is crowded with many people every year and sales are increasing.
It seems that they recently opened a third new venue outside the country.
The method peculiar to that theme park is popular with customers. And she directs them, but few people know about it.

What kind of person is she?
Her office is small and has few employees.
It’s a small workplace, like when Phineas Taylor Barnum started the circus.

But don’t be fooled by its appearance.

She is usually very kind and is described as a mood maker.
But that may not be her true appearance.

If she was a genuine CLOWN,
Someone who didn’t notice it could offend her.
I don’t wanna witness the shocking scene if possible.

Ambition(野望)：
Cover the galaxy with my singing voice

She is the most known of the four of them.
She is a member of a band centered around Spain and has performed outdoor concerts in Japan.

It is said that her growth is very advantageous to us.

Business is always aimed at the masses.
What if she became famous and was in charge of the ad?

Perhaps we can do what we want to do, without anyone even noticing it.

She has a name that means “queen” in Spanish.
When she changes from “PRINCESA” to “REINA”, a lot of people will work for “us”.

Ambition(野望)：
If you want to know it, prove it stronger than me,isn’t it?

How big! Those who see it think the same thing first.
There are various types of vehicles in front of you,
Even if you don’t know it, you can understand that they are all trucks.

For example… Dolly, which is often used at airports, is there, there are also cars for carrying horses, and you can see many types of cars.
But most are trucks with strong traction.

Imagine a person who looks good in this landscape.
You can imagine a strong person, like a Lion.

But you will find it wrong.
Dominating this office is a slender and beautiful Asian woman with long black hair.

She is called christmas
She will carry anything to a designated place, like Father’s promise.
Even if it was a black glowing gun that would destroy us.

Xmas gifts will be delivered to us again today. 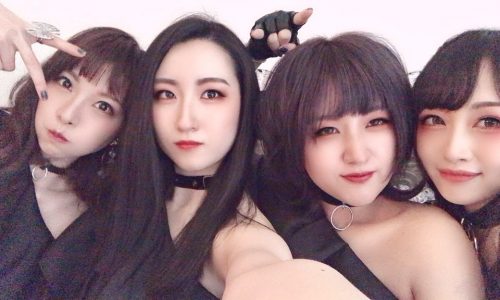